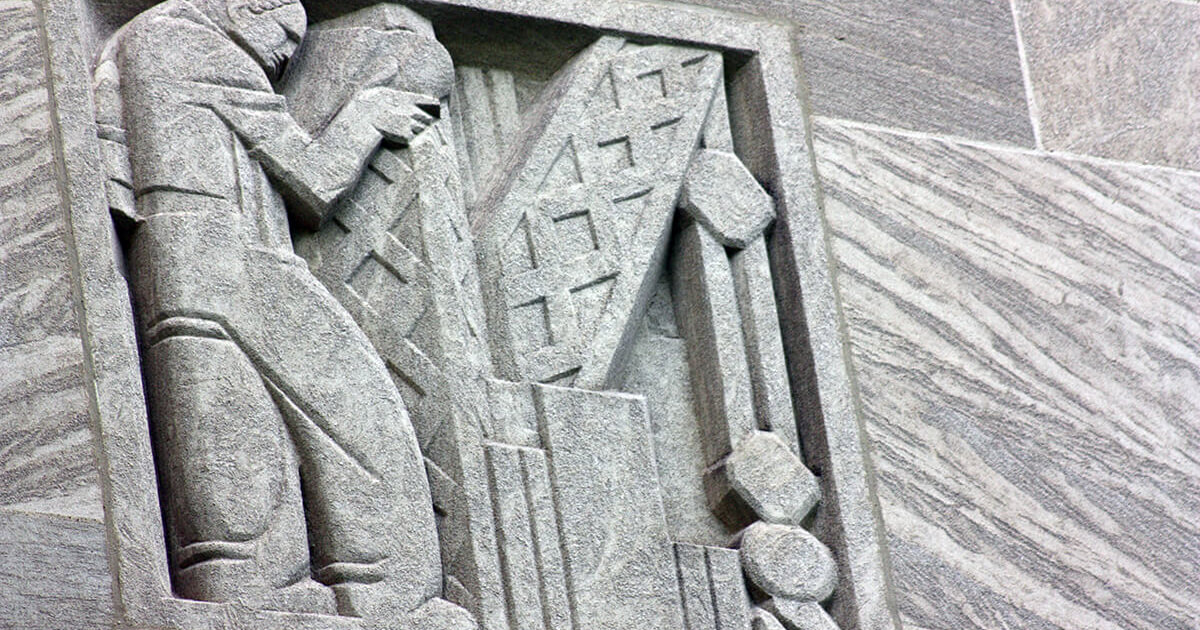 Hammond City Hall construction began in July 1931, amidst the Great Depression and through three different mayors and administrations. By mid-1920 Hammond had outgrown the city hall that was located at the corner of Hohman Avenue and Indiana. The local economy was booming with industry and business while local real estate development was drawing more residents into the city. Since the old city hall was overcrowded, it was felt that a new structure was needed to house all of the city offices and be an architectural statement about the prosperity of the city.

City Hall was designed by the architects Buckley and Skidmore. Louis Skidmore was the chief architect for the 1933-1934 Century of Progress World’s Fair in Chicago at the same time he was working on Hammond City Hall. In 1939, Skidmore established the international firm of Skidmore, Owings, and Merrill (SOM). This firm may be best known for the Sears Tower in Chicago, Illinois.

Hammond City Hall has classical detailing with an emphasis on Neo-Classical and Art Deco styles. Starting with the central rectangular three- story block flanked by two, recessed, two- story wings over a ground floor. The façade is constructed of Indiana limestone.

The west elevation was the original main entrance to the building, many details may escape the eye. Take a closer look starting from the roofline moving down to ground level. The roofline is the original plain-boxed cornice with decorative stone panels depicting stylized Ionic Order column capitals in the frieze. The ground level base of the façade has four horizontal bands formed by smooth-dressed limestone. The flanking portions of the building each have three double hung windows in the first story, and three decorative stone bas relief panels in the third story.

These panels depict a plane, a train, and men working a crane and heavy machinery in a very geometric, Art Deco style.

The central portion of the building; which is the main entrance, has a protruding enclosed front porch. Walking up the two flights of stairs are flanked by two original railings however the central railing is a newer addition. This porch is nine bays wide with six engaged Doric columns. The cornice of the porch has acanthus leaf modillions and dentil molding with geometrically stylized eagles flanking the protruding bays. The words “HAMMOND CITY HALL” are carved in the frieze flanked by decorative acanthus panels. On the protruding exterior bays are two decorative stone panels. The panel on the south bay depicts the face of a man with his hand over his mouth between figures of a man and a woman and the word “JUSTICE” carved below it. The panel on the north bay depicts a man’s face with his finger pointing to an open book with books on either side of his face. The word “LAW” is carved below it. Below each of these panels is a second story window and then another decorative stone panel depicting chevron and spiral designs. The main entrance was the location of Iannelli’s bronze doors. Above the original decorative granite and bronze surround is a pediment with the decorative “H” motif, which still used today as Hammond’s city symbol.

Alfonso Iannelli, an Italian-American sculptor and industrial designer created the ornate Art Deco front doors of City Hall. Iannelli gained a significant reputation when he was invited to work with Frank Lloyd Wright, on the Hyde Park “Midway Gardens” project in 1914, creating several of the “sprite sculptures.”

Later their partnership was dissolved, the “sprite sculptures” were later relocated to the Arizona Biltmore Hotel. In 1929 to 1930 Iannelli also collaborated with Chicago architect Ernest Grunsfeld III on several Art Deco style plaques of the zodiac signs and depictions of the planets in their mythological forms for the Adler Planetarium. Iannelli also worked on numerous exhibitions at the 1933 Chicago World’s Fair, Century of Progress.

In 1931 the architectural firm of Buckley and Skidmore hired Iannelli to create the doors for City Hall. Iannelli combined the geometrically simplified workers, a trademark seen in the “sprite sculptures” and the Adler Planetarium plaques with Art Deco ornamentation. In 1978, the doors were removed and placed on loan to Purdue University Calumet Campus, now Purdue University Northwest-Hammond. The reason for the forced retirement from the main entrance of City Hall was that OSHA (Occupational Safety and Health Administration) deemed them unsafe for a quick escape from the building in case of fire or other emergency due to their immense weight. They originally hung as a gallery exhibit on the main floor of the Student Faculty Library Center, outside the cafeteria. In 2011 they were moved to the White Lodging Center for Hospitality and Tourism Management at Purdue University Northwest-Hammond, where the six Iannelli doors adorn an entire wall in their restaurant. Before hanging the door at Purdue, the doors were cleaned and 47 years of the weathered protective coating were removed and they were restored to their original impressive state.

Iannelli combined geometrically simplified human figures, a trademark of his work, with the elegant ornamentation that had marked the Art Deco period of the 1920s and 1930s, when he designed the Hammond doors, as well as, other prominent designs both inside and outside of City Hall. There was a sturdy austerity to the design of Depression structures, almost symbolic of why our nation survived.

Above the transom portion of the door is a decorative bronze panel depicting an old, bearded man with an open book in his lap surrounded by geometric leaves, diagonals and chevron designs. Between the columns and the second and third story windows are seven metal panels. These panels consist of an Art Deco design in the center flanked by vertical bands and a scalloped design across the bottom.

The east elevation is the rear of the building and faces the Sunken Rose Garden. The roofline is also the original plain-boxed cornice with decorative stone panels depicting Ionic Order column capitals in the frieze. The ground level base of the façade has four horizontal bands formed by smooth-dressed limestone. The flanking portions of the building each have three double hung windows in the first story, and three plain square panels in the third story. The penthouse roofline is also visible from this side, revealing a copper cornice with decorative chevron and acanthus leaf design. As with west façade, there are eight original metal panels between the second and third story windows. These panels consist of an Art Deco design in the center flanked by vertical bands and a scalloped design across the bottom.

A double sided staircase accesses the main entrance on this side. The non-original double glass doors have an original bronze panel in the transom which depicts corn and a leaf in a repeated geometric pattern. The entrance is surrounded with an egg and dart molding and crowned with a dentiled cornice with flowers, leaves, and a scalloped design below the dentils. “HAMMOND CITY HALL ERECTED A.D. MCMXXXI is carved below that. Above the cornice of the entrance is a circular bas relief panel depicting a family flanked by the face of a man and woman in simple geometric style with the words “THE LAW OF THE PEOPLE IS THE SUPREME LAW” carved above.

The north elevation of the building consists two stories with five bays and four pilasters. The roofline is a plain-boxed cornice with words “CITY COUNCIL” carved in the frieze. The ground level of the façade has four horizontal bands formed by smooth dressed limestone. Between the pilasters and the second and third floor windows are three metal panels. These panels consist of an Art Deco design in the center flanked by vertical bands and a scalloped design across the bottom. The entrance on this side consists of a protruding ground level carport added most likely when the original garage was converted to create additional office space.

The South elevation, is the main public entrance. This façade consists of five bays with four pilasters. The roofline is a plain boxed cornice with the words MUNICPAL COURT” carved in the frieze. The ground level base of the façade has four horizontal bands formed by smooth dressed limestone. Between the pilasters and second and third story windows are three metal panels. These panels consist of an Art Deco design in the center flanked by vertical bands and a scalloped design across the bottom.